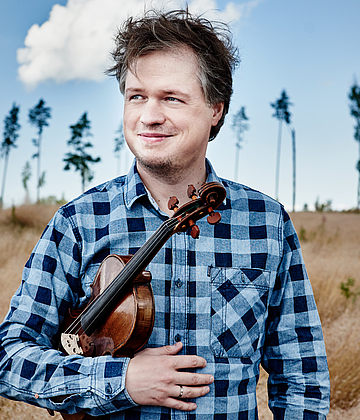 Norwegian violinist Henning Kraggerud is Artistic Director of the Arctic Philharmonic Chamber Orchestra. A natural and instinctive artist, Henning consistently draws audiences and critics towards the genuine quality of his playing.

In the current season, Henning is invited to return to the Toronto Symphony, Vancouver Symphony, Baltimore Symphony and Los Angeles Chamber orchestras. He makes debuts with the Brussels Philharmonic and the Tonkünstler Orchestra in Vienna, and performs with the Macao orchestra.

Henning composes his own music, performing many of his own works, arrangements and cadenzas in concert. As of 2014, Henning's reputation as a composer was sealed by the première of Equinox: 24 Postludes in All Keys for Violin and String Orchestra, composed as musical counterparts to a story by world-famous author Jostein Gaarder.

Henning is a Professor at the Barratt Due Institute of Music in Oslo, and International Chair in Violin at the Royal Northern College of Music in Manchester.

Henning Kraggerud plays on a 1744 Guarneri del Gesù, provided by Dextra Musica AS. This company is founded by Sparebankstiftelsen DNB.

“One of the reasons I like to participate as a juror in the Menuhin Competition is that they seem genuinely concerned about making the life for future musicians better and more meaningful. Several years ago the competition implemented my suggestion of incorporating improvisation as part of the competition for the youngest musicians. This was once a natural part of classical music life, a stimulating way of trying out new ideas, and could revitalize the genre again. I am working for a freer classical music life where more players dare to be even more creative and spontaneous; write their own cadenzas and compose music of their own. This was the norm in the 17th to 19th Centuries but sadly has been neglected in the last few decades. The Menuhin Competition has been listening with great sympathy to my ideas, and I will certainly continue to work with organisations like this who want to progress in these important matters. I hope to see even more development in the years to come.”