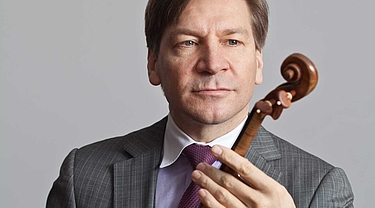 Two of the world’s greatest violin dealers, Christophe Landon from New York and Florian Leonhard from London, will be present throughout the Competition with a selection of their finest and rarest instruments and bows.

Christophe Landon was born in Fontainebleau, France in 1959. He started making violins aged 15 with Jean Eulry at Apparut & Hilaire in Mirecourt during the summer holidays, while studying to complete his baccalaureat in Mathematics. He went on to work with Jean Jacques Pages in Mirecourt, Max Moeller & Son in Amsterdam and Stephan Tomachot in Montmarte, Paris and won the gold medal for the sound of his asymmetrical viola at the Kassel Competition in 1983. In March 1984 he moved to New York to work with Jacques Francais in the workshop of Rene Morel and in 1987 established his own practice as a violin and bow maker, restorer, dealer and expert. Christophe Landon Rare Violins offers a wide selection of fine Italian instruments and French bows. Among the notable sales of fine instruments are the Guarnerius del Gesu "Donaldson" played by Lisa Batiashvili, the Montagnana cello played by Alisa Weilerstein and a spectacular Dominique Peccatte played by Leonidas Kavakos. With the help of his son, sculptor Adrian Landon, Christophe has developed an experimental frog and button made of titanium that he uses both on his own bows and on fine old bows to preserve the original fittings and facilitate international travel.

Florian Leonhard has dedicated his life to studying, restoring and making violins. Today he leads his own 12-strong team of restorers in London and runs offices out of London and New York. He is recognised as a leading authority on Cremonese and Italian violin making, and in this capacity, he has consulted and obtained instruments for many of the world’s leading soloists, including Leonidas Kavakos, Maxim Vengerov, Alina Ibragimova, Anne Sophie Mutter and many more. After 34 years of continuous research and experimentation, Florian finally launched his own bench copy instruments: ‘true copies’. His work is now in use by some of the best players; these musicians include principles in the Berlin Philharmonic and the Netherlands Philharmonic Orchestra, as well as including numerous finalists in the Queen Elisabeth competition. As a regular contributor to the ongoing research into violin making history, and having published his most recent book, The Makers of Central Italy, Florian is currently conducting research on the Tuscan makers for a book due to be published in 2018. Florian Leonhard Fine Violins of London and New York deal in the finest instruments and are honoured to work with musicians worldwide.