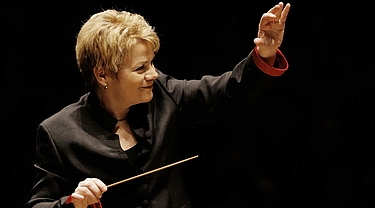 The American conductor Marin Alsop (who has recently been appointed Artistic Director of the Vienna Radio Symphony Orchestra, becoming the first woman to take up the prestigious role) in conversation with Gordon Back, the Menuhin Competition’s Artistic Director (and former accompanist of Yehudi Menuhin). Discussion in English.

Music Director of the Baltimore Symphony Orchestra, Marin Alsop is recognised across the world for her innovative approach to programming and for her commitment to education. She is Principal Conductor and Music Director of the São Paulo Symphony Orchestra. In 2019 she will become Chief Conductor of the ORF Vienna Radio Symphony Orchestra  She conducts the world’s major orchestras, including the Gewandhausorchester Leipzig, Royal Concertgebouw Orchestra, Filarmonica della Scala, Orchestre National de France and London Symphony Orchestra. She regularly conducts US orchestras. Her extensive discography has led to multiple Gramophone awards, recordings for Decca Classics, Harmonia Mundi and Sony Classical. She is the only conductor to receive the prestigious MacArthur Fellowship and was recently appointed Director of Graduate Conducting at the Johns Hopkins Peabody Institute. She was the first woman to be awarded the Koussevitzky Conducting Prize from the Tanglewood Music Center.

In the foyer of the Victoria Hall. For opening concert ticket holders only.